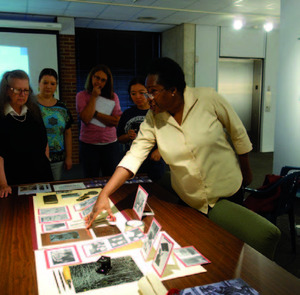 Professor Bowens-Saffo is a native of Miami, Florida, where she was a Silver Knight recipient in art sponsored by the Miami Herald Newspaper and currently Bowens work is in several Miami Public Art Collections: ARTBANK, Miami Dade Community College and the Miami Dade Public Main Library.

Bowens-Saffo undergraduate studies were a scholarship award and BFA Degree from Howard University in Washington, DC. The art program was a progressive leadership under the late Dr. Jeff Donaldson, founder of the historic Afro-Cobra movement. Her graduate studies in Printmaking started at Pratt Institute in Brooklyn, New York working with Walter Roglaski, a colleague of Gabor Peterdi. During this time Bowens also worked in New York City with Robert Blackburn, Founder of the Printmaking Workshop. Bowens-Saffo received her MFA degree is from Tyler School of Art, Temple University in Philadelphia. Her MFA graduate studies were one year in Rome, Italy. During the one year study aboard Bowens-Saffo had a solo exhibition of prints at the French Academy in Rome, Italy.

Bowens-Saffo has received Artist Fellowship Awards from the NEA Foundation, New York Foundation for the Arts, Ford Foundation and New York Percent for Arts Commission. She has exhibited her work nationally and international.